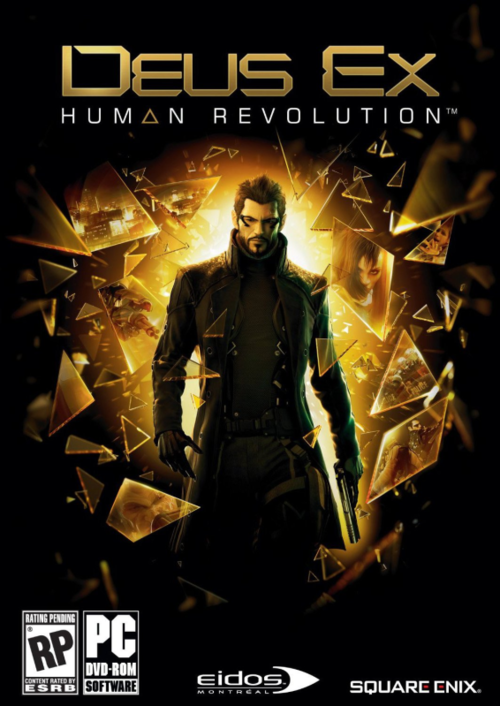 I’ve just finished a run through of Deus Ex so I thought it would be a good time for another in my increasingly infrequent series of game reviews.

Human Revolution is the sequel to Deus Ex the game commonly considered the greatest in PC history (which I must confess I’ve never played). I’m not going to recount the whole plot as Wikipedia can fill you in should you desire, but in brief you play Adam Jensen the head of security for a biotech mega corporation who is maimed and subsequently rebuilt as a bionic badass when his company is attacked by mercenaries. I’m a sucker for a cyberpunk setting so I’d been looking forward to playing Deus Ex for some time and it hasn’t disapointed.

The reviews I read before getting the game were positive, but tended to dwell on a few things that Deus Ex gets wrong (of which more later), but what really struck me when playing it is how many fundamental things it gets right.

I found it incredibly refreshing to play a game where even handguns feel dangerous (especially compared to Uncharted where some human opponents can survive a direct hit from an RPG). If an opponent sneaks up on you, or if you get careless in a firefight you will be dead in seconds, couple that with the relatively slow health regeneration and you have a recipe for some very tense action sequences. It is a credit to the game that though you will die a lot, it rarely feels cheap.

At its core Deus Ex is a story about the transhumanism and the ethics of unregulated biotechnology. You are frequently called upon to make moral choices, but it avoids the horrible goody-o-meter which recent games (I’m looking at you Infamous) seem to be much enamoured with and it mercifully doesn’t equate ethics to unlocking abilities.

Human Revolution gives you complete freedom to choose your play style. In nearly any situation you can get through it with stealth, hacking, charm or a bit of the old ultra violence. Indeed it’s possible to complete the game without actually killing anyone (for which a trophy is available). In most games I’ve played of this nature you always suffer if you play a non combat focused role due to missing out on loot and experience from slain grunts, but Deus Ex very cleverly awards extra XP for stealth takedowns, locating secret routes etc, meaning a Rambo style play through will probably net you fewer points than a more cerebral approach.

I know the sales figures of the COD franchise suggest I’m in the minority, but I don’t do FPS games as a rule. I just can’t work out how you are supposed to avoid getting flanked when you can’t see around you and I tend to spend at least some of every FPS game aimlessly spinning around trying to work out who the hell is shooting at me.

Human Revolution cleverly gets around this by switching to third person when you are in cover. 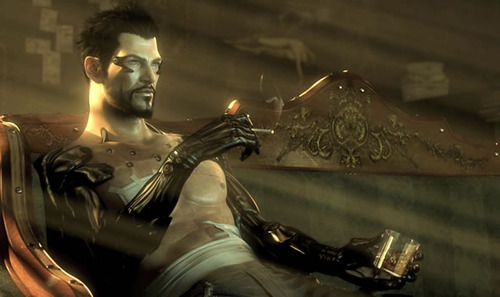 The game develops a great sense of place and mood. The city levels are small and densely packed meaning you don’t end up trudging for miles between missions and the newspapers and ambient conversations update to reflect what’s going on in the game. When hacking it’s great to stumble on petty email squabbles between NPCs. It helps that the side quests are generally consequential and tied to the main plot (rather than the typical meaningless fetch quests). By completing them you learn more about the protagonists back story and expand the world.

It alas this review can’t be a total love fest so I do have a couple of things to bitch about:

Your abilities are powered by a multi segment energy meter of which only the last segment automatically recharges. Other segments must be recharged by eating. This would be fine, but performing mundane tasks like carrying heavy objects drains your energy so you end up leaving your energy meter at one and only topping it up for combat. The idea that Adam is locked in a deadly firefight while cramming down Mars bars, seems a bit silly. (You can also chug a litre of vodka to regain health in a move which seems more like it belongs in Duke Nukem)

The lack of any melee weapon is also frankly barking mad. You can use energy to perform instant takedowns, but if you are facing more than one foe it’s either punch one and then fumble for an assault rifle while the other immolates you, or thump one, eat a chocolate bar then strangle the other one using what I’d like to dub the “punch up at Weight Watchers” technique. Gordon Freeman’s crowbar where art thou.

Without resorting to spoilers the end is very unsatisfactory. Your moral choices throughout the game basically result in a video montage plus voiceover end sequence which varies very little regardless of what you do. The ultimate fate and future of most of the characters and society as a whole is left hanging. The game is well written enough that you really care what happens to some of the characters so to just say “The End” is a bit of a pisser.

Any other complaints about the game pale into insignificance when the boss fight sequences are considered. These come dangerously close to ruining the whole game. At various points through the game you are dumped in a rectangular room with a near indestructible walking tank who proceeds to sling armfuls of grenades at you. Apparently these sequences were provided by an outside developer and you can really tell as they seem to be from a different game (specifically a mediocre 90’s PC shooter). The deadly combat means this is not a fun experience if you are playing as a combat focussed character, but the nature of the game is such that many players attempting a pacifist play through will get dropped into this level with only a taser and a tranquilliser gun and have to go back to an earlier save, or simply give up. The disjointed nature is underlined by the fact that there is no way to get past a boss without killing them which the game awkwardly gets around by not counting them as kills for pacifist players.

The only thing that prevented me from giving up during these sequences was the discovery that bosses are not immune to the instakill Typhoon smart bomb weapon. I’m not sure if this is a glitch or just the developers covertly acknowledging they had made a balls up and providing a means to opt out.

Though I have had a big moan about certain aspects it’s only because they stick out like a more thumb in an otherwise excellent game. Deus Ex is one of the best games I’ve played in a long time and if you are a fan of cyber punk, or action RPGs I recommend tracking it down.