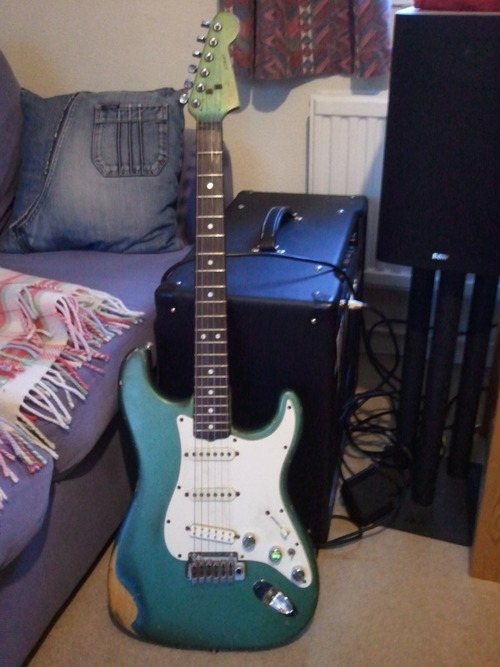 Let me introduce you to my Frankenstrat.

It was the first decent guitar I owned, bought for the princely sum of £200 back in 1996. I got it cheap because it had been bashed around and modified so much (Now people spend a fortune on fake looking “Relic” guitars). It’s been my constant musical companion for 15 years and is probably the only object I would consider running back into burning building for.

It started life as a 1980 USA made Fender “The Strat” (It’s a pretty rare model and I once saw a mint one in London for nearly two grand). When I bought it had been fitted with a horrible 80’s wang bar and shrill heavy metal pickups.

Over the years it’s had:

It’s getting to the point where the only original bits are made of wood. It’s a fantastic guitar and it records beautifully, but I’ve never managed to get the kind of live tone I want out of it as the two original pickups don’t tend to cut through in the mix and they blend pretty badly with the replacement bridge pickup.

I’m a big believer in replacement pickups as tone boosters after hearing guitars transformed from muddy junk into tone monsters with the addition of Seymours. I’ve been thinking about treating myself to some Bare Knuckle pickups for ages as they are supposedly god gift to tone, but never getting around to it as they are so bleeding expensive. Yesterday I came across the Iron Gear website quickly followed by reading huge quantities of rave reviews about them. They are spectacularly well priced and I could buy two whole sets for the price of a single Bare Knuckle.

I’ve taken the plunge and bought a set of Texas Locos off the back of a 5* review in Guitar Buyer. Sticking to the budget theme in these recession hit times I’m going to be fitting them myself so I’ve also invested in a soldering iron.

I’m planning to record some tone samples before and after and post them here so you can hear for yourself what the Iron Gears can do for my beloved mutant guitar.